The Fight for Freedom’s Sake

The Genesis of The Fight for Freedom's Sake Collection

For this month’s blog I thought we would do something different.  We are still going to talk about collectible rounds and bars but we are going to do it with a different perspective.  We are going to have a conversation with Patrick Hipple, the catalyst behind the newest collection from Osborne Mint, The Fight For Freedom’s Sake.

The Fight For Freedom’s Sake Collection

The Fight For Freedom’s Sake is a four piece collectible set featuring historic propaganda posters from World War II.  What makes these pieces even more unique is the “ canvas” on which the art is placed; each one is a 2 Troy ounces, .999 fine silver ingot and measuring 2.5” x 1.7”.  Osborne Mint is known globally for their ability to create distinctive rounds and bars, with customized images, made from copper, silver and brass.  This set is a step out of the ordinary for Osborne Mint as we will hear from speaking with Patrick.

A little about this amazing collection; there are four designed ingots with a colorized façade featuring one of the selected propaganda posters from WWII.  The uniformed reverse is a compilation of elements from multiple WWII propaganda posters crafted by our highly experiences engraver Mark Weeden.  The four featured posters are “Americans Will Always Fight for Liberty,” “Buy That Invasion Bond!,” “Uncle Sam – I’m Counting On You!” and “Buy War Bonds.”  These four propaganda posters were selected as good representations of the war message promoted by President Franklin D Roosevelt and the Office of War Information.  Creatives across the United States volunteered their talents to design these posters as their way of supporting the war effort.  All totaled over 200,000 different poster designs were created over the course of the war.  Designed to disseminate war information and control propaganda messaging these posters were seen in nearly every business, school and government facility. 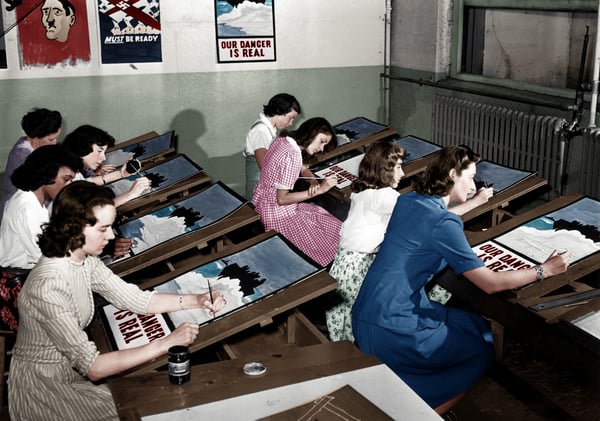 Why the Propaganda Posters?

Gibson: Hello Patrick, tell me why you selected WWII propaganda posters as the motif for this collection?

Patrick: Well Gibson, it was something that has fascinated me for years.  The more I researched the history of these posters, realized the variety and moreover understood their effectiveness I was taken by the concept of featuring these posters in a collection.  I knew immediately that this art would not be crafted to a traditional round, but enable us at Osborne Mint to utilize a much larger canvas.  To really demonstrate the artistry and enormity of these propaganda posters the piece had to be like miniature posters.  Ultimately we decided to craft these into ingots and this format enabled us to reproduce in full the bold colors and striking messaging that is characteristic of these posters.

G: Patrick, neither you nor I are old enough to have lived through the war so what was your inspiration to focus on WWII as opposed to say WWI?

P:  You are correct; I did not personally experience WWII, but my grandfather George F. Hupp Sr. (1915-1976) served overseas in WWII as a Naval Crew Chief and my grandmother Lois S. Hupp (1915-1978) was stateside volunteering her time and efforts in support of the war.  In a distant way, this is my opportunity to honor my grandfather’s service and bring attention to the efforts on the homefront.

G: How did you settle on just these four designs from what you told me were over 200,000 different poster options?

P:  Yeah the research did uncover a plethora of examples, so I worked to narrow down the choices first by selecting the more universal posters.  I then chose posters that had a propaganda message which addressed the entire war effort as a whole, knowing that I wanted to highlight what was asked of the people on the homefront.  Then I decided to rule out the most popular posters, the ones that everyone identifies with propaganda posters, like Rosie the Riveter, I wanted to bring attention to more unfamiliar examples.  Still left with a vast number, I began seeking a tie to Osborne Mint and Cincinnati. This turned out to be the best qualifier.  Cincinnati made an extensive contribution to the war effort both 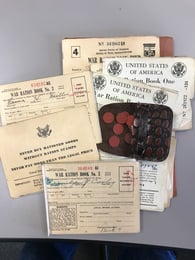 here and abroad.  Many of us know the stories of how Osborne Coinage minted over five million Ration Tokens during WWII and struck millions of carabiners for the United States paratroopers.  But did you know that Cincinnati's Strobridge Lithographing Company, recognized worldwide for their circus poster production, turned their design and print capabilities to the creation of propaganda posters and rapidly became one of the nation’s leaders of this unique craft?  Now I had a number of differentiators that helped to narrow the field.  My last and final determiner was; do I like it?

G: How did you gain permission to replicate these iconic posters?

P: That was actually one of the easiest hurdles I had to face.  Because these propaganda posters were created under issue of the Office of War Information there was no ownership to contend with.  These posters qualify as eminent domain and are free to replicate without repercussion.  We were able to reproduce the pieces exact and present them in all their grandeur.

G: This is your first project that you can call all your own, how does that make you feel?

P: Amazing, this has been such a fun and memorable experience.  The team here at Osborne Mint made it happen.  The bold digital colorization to the poster side of the ingots really made the pieces pop and created a 3D effect that captured the essence of the propaganda messaging.   A special thank you to Mark Weeden, who with his 23+ years of experience and thousands of designs etched the uniformed reverse of the ingot which appears on all four versions.

P: Well… the first ingot in The Fight For Freedom’s Sake series, “Americans Will Always Fight for Liberty,” is struck and available now through JM Bullion, AMPEX, and Shop The Mint.  The next three ingots will be introduced one per month going forward.  Being in the midst of the holiday season, these pieces make great gifts for veterans, current servicemen and women, WWII history buffs, silver investors and military families. However there are only 2,500 of each style minted so numbers are limited.

G: Thank you for sitting down with me and talking about our newest collection The Fight For Freedom’s Sake.  I’ve learned a lot and really appreciate knowing the backstory.

P: It was completely my pleasure.  I hope that people receiving these pieces enjoy them even a fraction of how much I enjoyed completing the project.  I would also like to say thank you for all those that serve, have served and that gave the ultimate sacrifice as well as honor those on the homefront for their determination and perseverance.

That was a fun way to acquire information.  I like knowing more about how the program came into existence, what was the catalyst, what was the why – and like Paul Harvey used to say, “Now we know the rest of the story.”

Patrick Hipple is an account executive in charge of numismatics here at Osborne Mint.  His passion for art and presentation are what brought him to Osborne.  Patrick has coordinated and developed projects with companies and countries around the globe.  Contact Info:  Patrick Hipple, Account Executive Numismatic Programs, hipple_patrick@osbornecoin.com, 513.681.5424 x 429.