The Latest Exclusive Releases in the Galaxies and Nebulae Collection

Osborne Mint has just released two solid silver additions to the Galaxy and Nebulae Spinner Collection, collectible art you can handle, spin and interact with.

Cincinnati, Ohio, Sept. 02, 2020 (GLOBE NEWSWIRE) -- Osborne Mint is the oldest private mint in the United States with more than 185 years of minting history.  Many of the pieces Osborne has crafted over the years are considered to be out of this world.  The newest release of the Whirlpool Galaxy (M51) and Andromeda Spiral Galaxy (M31) collectible rounds adds to that reputation, both literally and figuratively.

These two galactic collectibles are minted in one ounce of solid, .999 pure silver.  Each piece measures 39 mm (1.54”) in diameter and is 0.12” thick.  Osborne Mint guarantees the weight, purity and authenticity of these collectibles, as they are held to the highest production standards in the industry.  The precision and exquisite design details make these collectibles stars in their own right.

With 2020 marking the 30th anniversary of the Hubble Space Telescope, these medallions pay tribute to the wealth of information that Hubble has provided to the scientific community over three decades.  Even better, the telescope is still primed to perform perhaps another 30 years.  The plethora of images produced by the Hubble Space Telescope has enabled astronomers to identify stars and galaxies that are hundreds, if not

thousands, of light years away.  Both the Andromeda and the Whirlpool rounds feature images downloaded directly from the Hubble Space Telescope.  Each image is then combined with earth based radio telescopic data from world renowned astro-photographer Rob Gendler.  The result is a collection of scientifically accurate, photorealistic art with eye-popping colors and exquisite details that make the galaxies closer than ever.

Jeff Stegman, CEO of Osborne Mint stated, “Our design team at Osborne Mint wanted to pay homage to the massive impact the Hubble Space Telescope has had on astronomy, and with this being the 30th anniversary of the Hubble in orbit, there is no better time to feature some of Hubble’s most beautiful images.”

Osborne’s new Andromeda and Whirlpool Galaxy rounds are two examples of the most common type of galaxy, the spiral galaxy.  In 2016, it was estimated and documented that 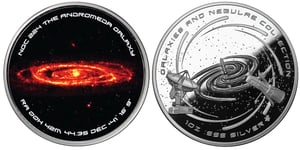 there are over 2 trillion galaxies in the universe.  There are four main categories of galaxies based on their visual morphology: elliptical, spiral, barred spiral and irregular.  The two galaxies that Osborne Mint selected were chosen for their immediate eye appeal, color scheme and beauty.

What makes these Galaxy and Nebulae rounds seem supernatural is that they are also spinners - they can be played with and enjoyed.  What better way to connect the next generations of collectors than by allowing them to physically enjoy these pieces of art by spinning them to their hearts’ content?  Each of these medallions has a raised point on the reverse (the unprinted side) that allows them to spin.  The motion of the galaxy is demonstrated with a whirl of the round.  As the pace of the spin slows down the image of the Andromeda and the Whirlpool Galaxies is mesmerizing and somewhat hypnotic.  The additional opportunity to enjoy the art of these rounds with a twist of your fingers takes these pieces to a whole other dimension of collectibility.

Each round is enhanced with Osborne Mint’s COIN-SHOW™ design technique, allowing the sheen of the silver to shine through the colors of the art, adding dimension, mystique and beauty.  The intricate designs demonstrate exceptional design depth and detail.  The open reeded collar edge allows the rounds to be individually engraved with a unique serial number which is accompanied by the matching certificate of authenticity.

The common reverse of these pieces includes a three dimensional version of a spiral galaxy, a land based radio telescope and an action pose of the Hubble Space Telescope. 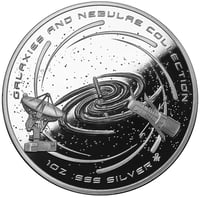 Each round also includes the actual astronomic location of each galaxy in the mass of the universe.  Utilizing the corresponding Right Ascension (RA) and Declination (DEC) coordinates shown on the rounds, one is able to pinpoint the exact location in the sky where these galaxies can be observed. As a means of preserving the glory of these rounds for centuries, each is coated with jeweler grade lacquer that seals the rounds, preserves the vibrant colors and enables finger prints to be wiped off – encouraging one to spin them!

Both the Whirlpool Galaxy (M51) and Andromeda Spiral Galaxy (M31) Rounds are Osborne Mint exclusives and only available by direct purchase from Osborne Mint’s Shop-the-Mint website – www.Shop-The-Mint.com.  Marvin Schott, amateur astronomer and galactic collector recommends that we “hurry up and get one of these (Galaxy and Nebulae Spinners), as we may have only 4 billion years to enjoy these collectibles.”  That is the estimated time-frame in which the Andromeda galaxy is said to collide with our Milky Way.

Established in 1835, Osborne Mint is America’s oldest continuously operating private mint. Osborne Mint is part of the Osborne Coinage family, which includes Osborne Coin, TokensDirect and Van Brook of Lexington. The mint, a 60,000 square foot facility in Cincinnati, Ohio, houses the development, engraving and manufacturing of numismatic quality collectible rounds and coins. Products made by Osborne are manufactured to strict standards for metal purity, weight and dimensions. Osborne Mint strikes thousands of collectible rounds annually and circulates them to the public through certified distributors. Now one can purchase collectibles direct from Osborne Mint through their e-commerce portal (Shop-The-Mint.com). Featured collections include: designs by Lisa Parker, Anne Stokes’ Dragons, The Galaxies and Nebulae, The Fight for Freedom’s Sake  and The American Legacy Collection. Gold plate, fine silver and copper collections from Osborne Mint are truly pieces of art and are 100% “Made in America.”