Otto the Otter Round

Here at Osborne Mint, we know animals, we have minted a lot of them on silver and bronze. We have minted birds, dogs, dragons and jackalopes on collectible rounds. But in honor of the Fergus Falls 150th Anniversary Celebration we get to add another animal to the list, a giant of sorts…

You really OTTO read this one:

Fifty years ago, Fergus Falls took Minnesota’s largest aquatic carnivore to new heights by building the world’s largest otter sculpture of Otto the Otter. This 15 feet tall and roughly 40 feet long concrete giant is a tribute to their 100th year of existence of the city along the Otter Tail River. 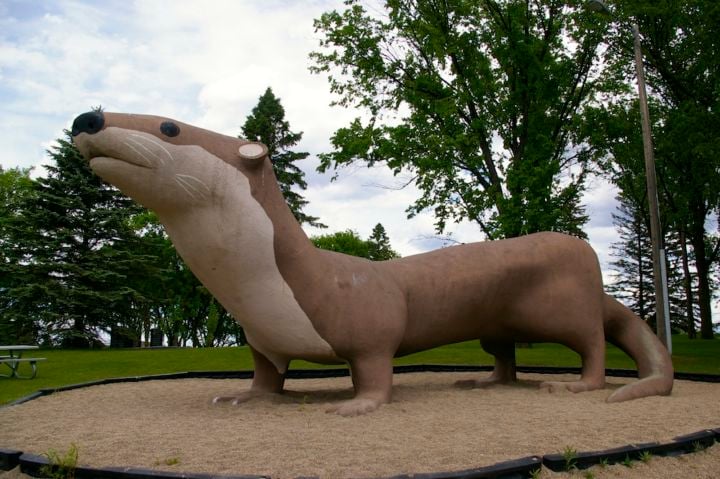 Fergus Falls’ enduring enthusiasm for otters has permeated the city since its founding. This love was solidified and renowned through the national popularity of Otto, the beloved world’s largest otter and gift from Steven Alan Jaenisch and the 1972 Fergus Falls High School metalworking class.

Since that 100th celebration, this otter-worldly centennial tribute became an iconic feature year after year and has attracted people from across the country to Fergus Falls. The city was determined to design another successful celebratory piece commemorating the community and fittingly featuring beloved Otto.

For their sesquicentennial celebration, Osborne Mint stepped up to help Fergus Falls 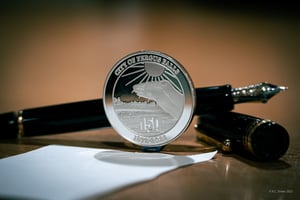 successfully create another enduring and meaningful memorial with limited edition commissioned rounds for the city and others across the country, thus creating a connection to the community.

In the land of over ten thousand lakes, picture yourself on the water at the intersection of forest and prairie lands. Envision numerous otters slowly emerging from the water. Your eyes fixate on one as its head pops up and down as it bobs and weaves toward the bank.

As you scan the shore, you suddenly see another otter standing over fifteen feet tall and forty feet long, silently guarding the terrain as it stares you down, (somewhat) eye to eye. What is going on, no one else in the area seems alarmed. People are actively approaching the aquatic beast, taking pictures, snapping selfies and petting it. This is the moment you actually meet Otto and experience Fergus Falls’ structural tribute to their annual centennial celebration.

Otters are at the forefront of the Fergus Falls community through everything from mascot to local lore. Everyone has heard of Otto, and many have tales, sometimes tall, of their own encounters with the local legend. Osborne recognized the significance of the centennial tribute as a natural fit on the front of the special sesquicentennial design due to their diligent research on the community’s history and culture.

Osborne has mastered the art of creating and preserving such mental imagery by closely collaborating with clients to design and define such landmarks, scenery and animals on their commissioned coins. With experience dating back to before Fergus Falls’ founding, Osborne Coinage was confident and excited to successfully join forces and create an elegantly designed round commemorating the city’s 150th year.

“We wanted to take the design for the 150th in a little bit different direction, making sure that it was going to be something special,” said R.C. Drews, Fergus Falls 150-Committee member and local writer. “Osborne Coinage was the company that helped make that happen.”

With the design, Osborne worked to encapsulate in time the feeling of the city’s iconic creature diligently watching and waiting as bold, brilliant rays stream down on Fergus Falls. This imagery accompanied by the elegant engraving of “150 years” serves to symbolize the success and continued bright future for the community of Fergus Falls. 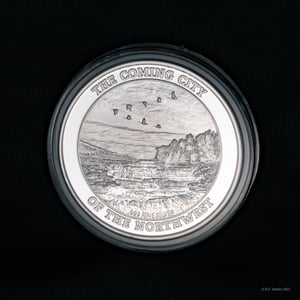 The design of the reverse side became a reality through a devoted partnership with Fergus Falls 150-Committee and local artist, Blayze Buseth, who owns the Creation Shop. Osborne strives to understand the subject of each creative commission through immersion in the community and unity with such local artists.

The creative committee and other local parties worked closely with Osborne to get the specifications for the reverse side just right. Buseth is known for his intent to create artwork based on his unique surroundings and concepts he creatively confronts at each location. He specializes at constructing commemorative carvings with distinctive designs of scenery and relevant representations of local surroundings.

The backside of the coin displays the idea of stumbling onto a space where the prairie meets the woods along the Otter Tail River around Fergus Falls. Osborne understood the importance of highlighting how the river was key to the settling and success of the city.

The final design includes hand-polished rapids stylishly etched to stand out against the textured scenic background details. A flock of geese are charmingly engraved into a V-shape flying into the future to connect the piece’s back details to the expression of Otto's positive pointed gaze on the front.

Boldly emblazoned around the ring of each coin is Fergus Falls’ founder George B. Wright’s famous invitation to all to join “The Coming City of the Northwest” 150 years ago. Now and then, Wright’s words served to entice people to remain and respect the power of the river community’s development. 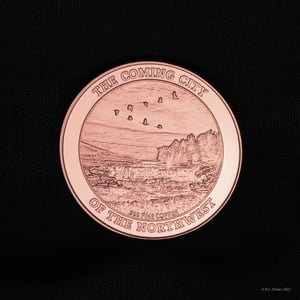 holder to imagine themselves discovering such a scene and stepping back into a moment in time when the founders decided the land was special enough to settle. Locals still celebrate “the waters of the mighty river” and Wright’s call to see the potential of the land “flowing with wheat, potato, and cabbage.”

“Delving deep into the minds and true character of our clients to create unique and timeless collections that directly honor each and every notable celebration is one of my favorite parts about working at Osborne,” Gibson Olpp, Marketing Manager, Osborne Mint and Osborne Coinage, said. “Our company provides many opportunities to intimately understand and enrich communities of all sizes across America with quality keepsakes for all their commemorations and successes.”

On May 1, 2022, a limited quantity of 500 copper coins and 100 silver coins were released to the public exclusively at the Otter Tail County Historical Society gift shop and the Victor Lundeen Company, a local family-owned business operating in the heart of Fergus Falls since 1914. All proceeds will benefit the Otter Tail County Historical Society.

As a leader in custom minted numismatic quality rounds, Osborne worked meticulously with the city to create a timeless piece of memorabilia for the community to remember this milestone and the feeling it evokes. A key aspect of this project was making these tokens of history readily available and affordable. This collection salutes the settling of an up-and-coming city 150 years ago while also instilling the essence of the city’s modern slogan of “Find us, Lose yourself” within the holder.

Collectors will find that every single silver coin is individually struck to guarantee their rarity. Only 100 commemorative .999 pure silver coins will be available for $45 each. The silver version of this collection is a (1)-ounce .999 solid silver round, 39 mm in diameter with a reeded edge. Sharing the same dimensions and sleek style, each of the 500 commissioned .999 pure copper coins will be sold at $6 each.

Once all the coins are sold, the distinct minting dies will be displayed and kept as an anniversary artifact at the Otter Tail County Historical Museum for all to visit and appreciate.

All made in America, each Osborne piece is held to the highest standards for purity and production. These historical tokens are tangible commemorations that can be collected, passed down, as well as gifted to your significant otter!

Fergus Falls invites one and all to find them and lose yourself in their yearlong sesquicentennial celebrations! Focusing on the faces and places that have made the city a success over the last 150 years, exclusive exhibits, tours, reenactments, and keepsakes will be offered throughout the year.

After visiting Otto, we are sure you will otter-matically want a commemorative coin of your very own! Again, these stunning collectible coins will be first available for purchase on May 1, 2022, with only 100 silver coins and 500 copper coins minted, once they are gone, they are gone.

As America’s oldest privately owned and operated mint, Osborne understands the importance of historical commemoration and takes anniversary celebrations very seriously with their devotion to detail and quality.

Globenewswire: Design to WIN and See Your Art Minted on Pure Silver

Osborne Mint is hosting their first ever “design a round” contest, encouraging artists, designers and illustrators to cr...

Collector or Hoarder - You Be the Judge! Blog XXI

Collector or Full-On Hoarder? I’ve always believed that there is a fine line between collecting and hoarding. In fact,...