Women's Herstory Month: Celebrating Women In The Military With Silver

Osborne Mint strikes a two ounce silver ingot commemorating the women who served in World War II and celebrating all women in the armed services, past and present, honoring them during Women’s History Month.

Cincinnati, Ohio, March 02, 2021 (GLOBE NEWSWIRE) -- Osborne Mint is the oldest privately owned and operated mint in the United States, designing, crafting and striking all of their collectibles in Cincinnati, Ohio.  Across their entire 186 years of mint production, never before have they seen a response to a collection like that of the “Fight For Freedom’s Sake” collection, focused on propaganda posters of WWII.  The original collection of four, two ounce, .999 fine silver ingots has set record sales for Osborne’s Shop-The-Mint ecommerce website, leading them to introduce an exclusive, new member to the set. 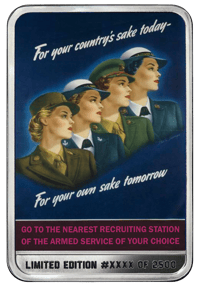 The newest addition honors women that served with a re-creation of the poster “For your country’s sake today – For your own sake tomorrow.”  Perfect timing for the release of this ingot as it honors all service women during March, Women’s History Month.  In the original selection process, Osborne Mint’s designing and engraving teams nominated several designs that were close, but ultimately not chosen.  The newly selected propaganda poster is from that queue.  It will be digitized onto a two ounce .999 pure silver canvas, 2.50" x 1.70" in size, in a limited quantity of 2,500 individually numbered pieces.  Osborne Mint’s Made In America pieces are world renowned for their craftsmanship, metal purity and true authenticity.  This latest addition to the collection will ONLY be available through Osborne Mint via their Shop-The-Mint ecommerce website – this exclusivity adds to the value of the piece and the collection.

The obverse of the ingot will host the 1944 propaganda poster in full color. The original propaganda poster created by Steele Savage is a drawing of four women in uniform, each representing one of the female military divisions: Women's Army Corps (WAC), the Navy Women's Reserve (WAVES), Marine Corps Women's Reserve (WR) and the Coast Guard Women Reserves (SPARS).  The poster appealed to the patriotism of women aged 20 to 35, prompting them to enlist in the armed forces.  Women flocked to their local recruiting station to join the service.  By emphasizing the opportunity for women to choose, the poster inspirited women to act, to the tune of more than 275,000 women serving during WWII across these four forces. The Osborne Mint permanent colorization process perfectly captures the tints and hues of the original poster in all its grandeur.  The imagery of both the ingot and the original poster creates a sense of patriotism and confidence for all.

This silver ingot will share the common reverse with the previous four in the set.  The reverse is the work of Osborne Mint’s highly skilled digital sculptor Mark Weeden and his 23 years of engraving expertise. The highly detailed engraving on the highly polished side of the ingot depicts numerous attributes from other WWII propaganda posters collaged into one striking image.  This side also shows the ingot’s weight, purity and mintage number along with the official seal of Osborne Mint, which definitively represents the quality, accuracy and craftsmanship they are known for globally.

Noting that March is Women’s History Month, Osborne Mint wanted this piece available in time to be a catalyst for discussion.  President Jimmy Carter first signed the Women’s History Week proclamation in 1980, designating March 8th as the start of Women’s History Week.  Presidents began issuing annual proclamations in 1995 designating the month of March as “Women’s History Month.”  These proclamations recognize the specific achievements women have made over the course of American history.  Moreover, these declarations provide a forum to celebrate the contributions of all women. Osborne Mint created the silver ingot “For your country’s sake today – For your own sake tomorrow” in tribute to these decrees.

The first four propaganda posters designated for the “Fight For Freedom’s Sake” collection were selected because of their diverse presentation of the war message, and the newest addition continues that tradition. The first four ingots in the collection are still available for purchase at https://shop-the-mint.com/collections/fight-for-freedoms-sake, and they include: 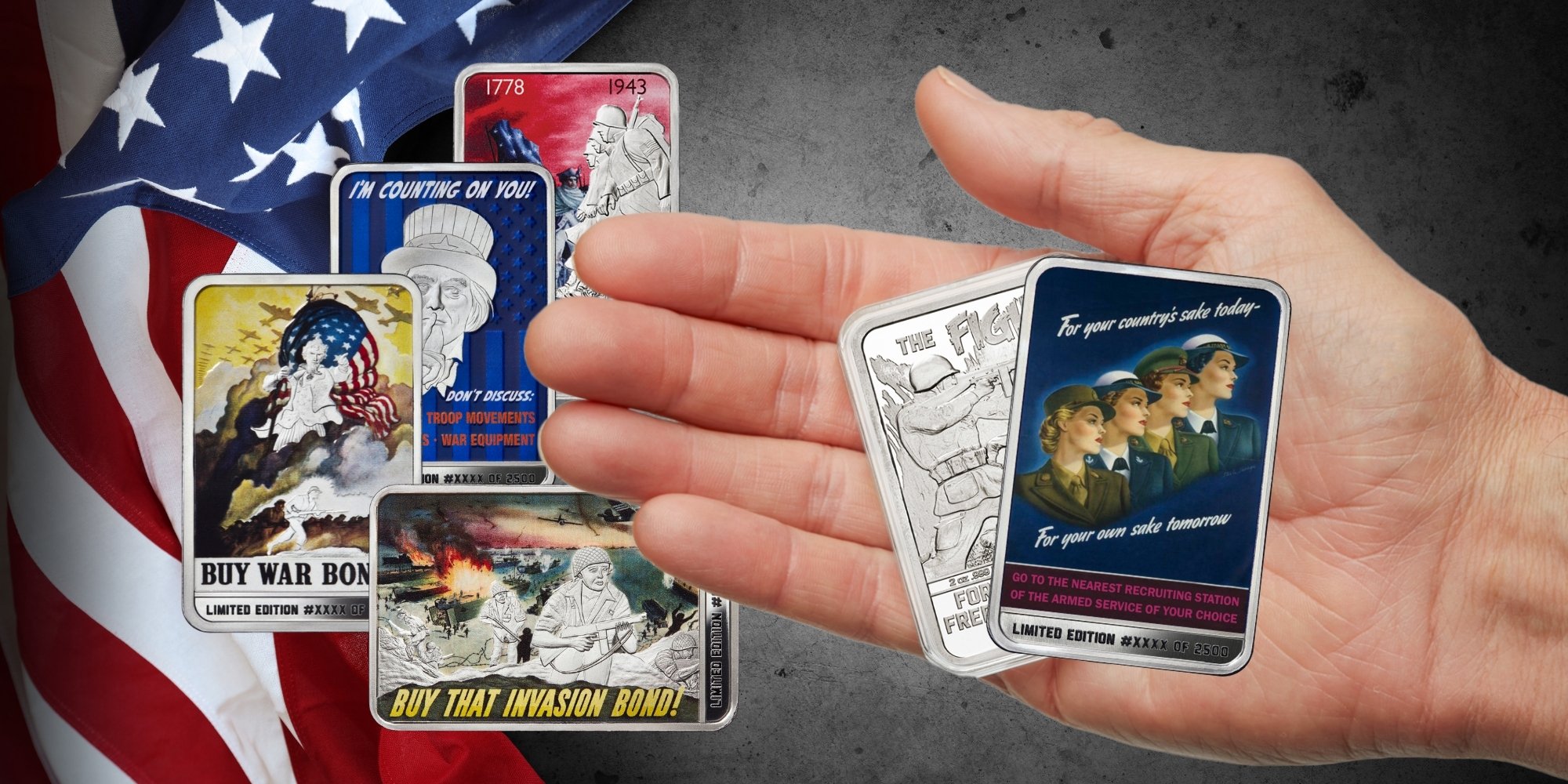 Each collectible will be housed in a custom shaped capsule to preserve the finish and is accompanied with a certificate of authenticity citing the sequential production number of each bar, up to number 2,500.  This latest addition to the “Fight For Freedom’s Sake” collection is exclusive to Osborne Mint and not be distributed by any other vendor. These ingots can ONLY be purchased directly from Osborne Mint via their Shop-The-Mint ecommerce site.

Osborne Mint is currently accepting pre-orders for this collectible on their Shop-The-Mint.  Connect with Osborne Mint via their multiple social media outlets (Facebook, Instagram, YouTube) to track the silver ingot’s true release date and other announcements.  If the response to this offering is like that of the previous four, these will go fast.

Established in 1835, Osborne Mint is America’s oldest continuously operating private mint. Osborne Mint is part of the Osborne Coinage family, which includes Osborne Coin, TokensDirect and Van Brook of Lexington. The mint, a 60,000 square foot facility in Cincinnati, Ohio, houses the development, engraving and manufacturing of numismatic quality collectible rounds and coins. Products made by Osborne are manufactured to strict standards for metal purity, weight and dimensions. Osborne Mint strikes thousands of collectible rounds annually and circulates them to the public through certified distributors. Now one can purchase collectibles direct from Osborne Mint through their e-commerce portal (Shop-The-Mint.com). Featured collections include: designs by Lisa Parker, Anne Stokes’ Dragons, The Galaxies and Nebulae, The Fight for Freedom’s Sake and The American Legacy Collection. Gold plate, fine silver, copper and brass collections from Osborne Mint are truly pieces of art and are 100% “Made in America.”

For more information on Osborne Mint visit our website: www.OsborneMint.com