When one thinks of the American West, frontier gamblers often come to mind. Depicted in movies, TV series, and cultural tales alike, the gambler was a stock character and was usually portrayed as a gentlemanly southerner living a life outside the bounds of law and order.

On the obverse of the American Western Skulls Gambler Silver Round is the image of a wide-eyed gambler with a long cigarette in his mouth and a massive top hat. 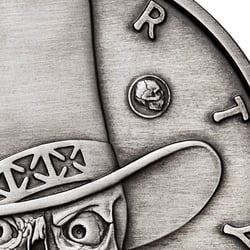 Not one to immediately resort to violence, though not unthinkable that he would, the Gambler Silver Round doesn’t use a weapon in the crossed design at the bottom. Instead, the design features the famed Dead Man’s hand of aces and eights. The Gambler is the only design in the series to feature a privy mark. A privy mark (to quote Wikipedia) “was originally a small mark or differentiation in the design of a coin for the purpose of identifying the mint, moneyer, some other aspect of the coin's origin, or to prevent counterfeiting.”

The common reverse of the American Western Skulls silver rounds feature the design that will be used throughout the series.

Referred to as the fried eagle, this image is a clever twist on the heraldic eagle found on the reverse of American Silver Eagle coins. It features the American bald eagle’s skeletal form behind the national shield as it clutches the arrows of war in one talon and the olive branch of peace in the other. This limited edition collection is available in 1 ounce and 5 ounce .999 silver. Proof, antique and colorized finishes are offered in both weights.

Minted in Cincinnati Ohio from American sourced .999 pure silver, it has a minimum weight of 1 Troy Ounce or 5 Troy Ounces. Each Coin is struck to proof standard, serial numbered, packed in a clear capsule and ships along with a Certificate of Authenticity with matching number. Every product made by Osborne is manufactured to the strictest standards for metal purity, weight and dimensions.