The second in the Cryptid Creature collectible series from Osborne Mint features The Jackalope master crafted in one troy ounce of .999 fine silver.

What could be more fitting for the pride of Douglas, Wyoming, known as the “Jackalope Capital of the World,” than commemorating their city’s mascot, the jackalope, in pure silver metal.  Osborne Mint has done just this in the latest addition to their Cryptid Creatures Collection.  Osborne Mint is the oldest privately owned and operated mint in America minting silver, bronze and copper rounds and ingots since 1835, featuring presidents to aliens, war posters to jackalopes. 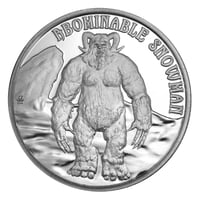 The fine silver Jackalope collectible round is the second cryptid featured in Osborne Mint’s Cryptid Creatures series, joining The Abominable Snowman (The Yeti) as beasts believed in, feared and revered.  The jackalope is said by many to be a mythical creature that exists only in folklore and tall tales. However, the artisans at Osborne Mint believe differently.  Their designers and artisans studied the habitats, reviewed known sightings and scanned hundreds of images of the jackalope to construct the perfect likeness on the obverse of this .999 fine silver round.

“The Cryptids are rapidly becoming one of my favorite collections.  The research, the conversations, and the believers are so exhilarating.  The more I discover about these somewhat mythical creatures, the more I believe.  Our rendition of the jackalope will serve notice to the presence, history, and reality of these critters,” stated Gibson Olpp, Marketing Manager at Osborne Mint. “Celebrate the jackalope with this made in America fine silver collectible.”

The jackalope, one of the rarest animals in the world, is a cross between a now extinct pygmy deer and a species of killer rabbit.  Others claim the jackalope to be a cross between a jackrabbit and an antelope.  These antlered rabbits stand about one to two feet tall, with brownish-colored fur and an average weight of three to five pounds.  They can move at lightning speeds, at times up to 90 miles per hour.  These fearsome critters are extremely vicious when attacked, using their antlers as spears and their powerful hind legs as clubs.  These little devils often avoid capture by imitating human voices to confuse or misdirect a hunter.  The one sure-fire means to even get close to a jackalope is to lure it to your campfire.  The cowboys of the old west perfected this trick by placing a fresh glass of whiskey next to their fire and waiting for the jackalope to come to take a drink to warm itself inside and sit by the fire to warm itself outside.  Once relaxed, the cowboys would make their move, capturing the critter and making plans to post it on the trophy wall.

The history, heritage, and folklore that are the Jackalope are enveloped in this collectible round.  Not only is the jackalope itself prominently featured, but the folktale is maintained with the addition of the cowboy boot, the bottle of rye whiskey, and the full glass of whiskey awaiting its recipient.  This art is minted onto one troy ounce of .999 Fine Silver, along with these words of wisdom: “FEAR the Jackalope.”  The silver collectible is 39 mm (1.54”) in diameter and is 0.12” thick with detailed engraving.

The common reverse for this collection contains the Osborne Mint logo, synonymous with quality, purity, authenticity, and artistry.  This side also formalizes the weight and metal of the piece being “one troy ounce” and “.999 fine silver”.  Along with the starred and striped shield blanketed with the spread wings of an eagle, is a banner signifying the collection by name – Cryptid Creatures.

The collectible round featuring The Jackalope can be ordered on Osborne Mint’s Shop-The-Mint e-commerce website - https://shop-the-mint.com/collections/all/products/now-available-the-jackalope-solid-silver-round.

Connect with Osborne Mint via their multiple social media outlets (Facebook, Instagram, YouTube – click the YouTube link to see the Cryptid promotional video) to track future release dates and announcements.  Our exclusive distribution partners at APMEX will soon have available a one-ounce, .999 fine copper version of this collectible, as they did the original cryptid The Abominable Snowman (The Yeti).

Established in 1835, Osborne Mint is America’s oldest continuously operating private mint. Osborne Mint is part of the Osborne Coinage family, which includes Osborne Coin, TokensDirect, and Van Brook of Lexington. The mint, a 60,000 square foot facility in Cincinnati, Ohio, houses the development, engraving, and manufacturing of numismatic quality collectible rounds, bars, and coins. Products made by Osborne are manufactured to strict standards for metal purity, weight, and dimensions. Osborne Mint strikes thousands of collectible rounds annually and circulates them to the public through certified distributors. Now one can purchase collectibles direct from Osborne Mint through their e-commerce portal (Shop-The-Mint.com). Featured collections include designs by Lisa Parker, Anne Stokes’ Dragons, The Galaxies and Nebulae, The Fight for Freedom’s Sake, Aliens, and The American Legacy Collection. Gold plate, fine silver, copper, and brass collections from Osborne Mint are truly pieces of art and are 100% “Made in America.”

For more information on Osborne Mint visit our website: www.OsborneMint.com