GlobeNewswire: The Right to Bear Arms and Four Rounds

The Right to Bear Arms and Four Rounds

Cincinnati, Ohio, Dec. 23, 2020 (GLOBE NEWSWIRE) -- One of the most heavily debated US Constitutional Amendments, the Second Amendment, outlines the right to bear arms, but not everyone reads the copy the same.  The Second Amendment collection from Osborne Mint identifies one side of this debate – those in support of gun freedoms.  The four round collectibles in the series showcase the views of staunch supporters of the Second Amendment’s phrase “the right to bear arms”.  Osborne Mint designs, crafts and strikes all of their collectibles in Cincinnati, Ohio.  These Made In America collectibles are known for their craftsmanship, metal purity and true authenticity.

“Who would believe that 27 words, written and ratified over 225 years ago, could still be having such an explosive and divisive impact on our country?  These collectibles are designed, not in support or opposition of either side of the argument, but solely to draw attention to the separation created,” stated Gibson Olpp, Marketing Director for Osborne Mint.

Are you a distributor or retailer interested in selling this collection to your customers?

Available by special order, these rounds can be minted in either .999 pure fine silver, copper, brass or nickel silver with the opportunity to personalize the reverse side, or these handcrafted designs can share a common reverse scribing the actual verse of the 2nd Amendment.  The words on the reverse of this version of the rounds were first written in 1791 by James Madison and were included as one of ten amendments forming the Bill of Rights.  Congress ratified all ten amendments in December 1791 and they became law. One lesser-known controversy regarding this amendment revolves around the way it was written. Madison’s wording is a little confusing and leaves the true meaning up for interpretation. Thomas Jefferson even attempted to clarify its meaning by removing two commas.  The first phrase below shows Madison’s version and the second shows Jefferson’s proposed corrections. 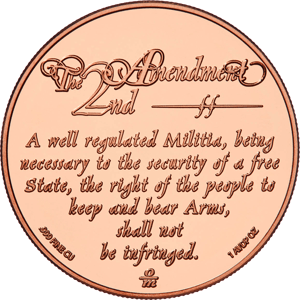 However, Jefferson’s efforts were moot once he discovered that the Amendments had already been shared with the States and agreed upon by Congress. To this day Madison’s stroke of the pen makes a considerable difference in the interpretation of the 2nd Amendment. With Thomas Jefferson’s changes, some read this amendment as solely allowing the right to bear arms in the context of a militia. It is Madison’s original text that we selected for these collectibles.

Each of these metal rounds features intricately crafted, uber-detailed engraving dies, that when minted deliver exceptional depth in design.  Each blank is struck twice using a higher pressure setting to ensure the design details have been formed.  This depth enhancement lends the obverse side of the rounds to be three dimensional and more complex in design.  Again you can special order these 2nd Amendment collectible rounds in silver, copper, brass or nickel silver and have the option of a high-polish finish or an antiqued look.

Correspondingly the common reverse we’ve created for these rounds holds the identifying marks for the quality of the copper or silver as being .999 Fine, the true weight of the round, 1 AVPD Oz and the brand mark of Osborne Mint representing integrity, quality and authenticity.  The rounds measure 39mm diameter (1.54” – approximately US silver dollar size) and the thickness is 0.12”. These rounds feature reeded edges and are made coin flip.

Are you a collector interested in purchasing the solid silver rounds? Find out more.

The obverse of these collectible rounds offers four distinct designs

Capitalizing on the recognition of the first three words of the 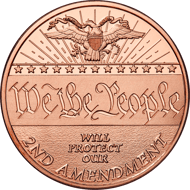 Declaration of Independence, this copper collectible visually ties the Constitution to the 2nd Amendment by slightly modifying and unifying their copy.  The crown of the round illustrates the American bald eagle along with the Great Seal of the United States to symbolize freedom.  The symbolism continues with the outstretched talons of the Eagle grasping alongside its right spur an olive branch representing peace and the other claw clutching a bundle of 13 arrows (referring to the 13 original states), together they symbolize that the United States has "a strong desire for peace, but will always be ready to protect and defend."

The intricacies of this design are many; the flurry of the bald eagle’s

feathers, the wisp of the golden oak leaves and the unfurling of the banner across the span of the eagle’s outstretched wings.  This collectible headlines with The 2nd Amendment and reinforces the 1791 ratification of the Amendment.  Unifying the symbolic features of the collectible are the presence of two revolvers, the American flag and the words “shall not be infringed.”

This realistic rendition of a skull is emblematic of the fact that American citizens are willing to die to protect their Second Amendment rights.  The declarative, bold font, adorned by barbed wire, emphasizes the word PROTECT as a means to take a stand in defense of the Second Amendment.  The simplicity of this design emboldens the message.

Instantly recognizable and immediately associated with the

American Revolution and our country’s fight for freedom, the minute man represents our militia that was ready to fight “in a minute’s notice.”  The root of the design was inspired by the monument “The Lexington Minuteman” created by Henry Hudson Kitson in 1900.  Osborne Mint took the liberty of modernizing the statue by replacing the musket with a semi-automatic AR-15 rifle.

These rounds can be purchased individually or as a set as special order directly from the mint.  Special pricing for bulk purchases and individually designed back panels can be received by simply calling the mint at (800) 488-2646. Serving as America’s oldest private mint, Osborne Mint has struck thousands of designs over the years, from the American Legacy Collection honoring the US Mint’s coinage to the Fight For Freedom’s Sake ingots spotlighting various WWII propaganda posters.

Established in 1835, Osborne Mint is America’s oldest continuously operating private mint. Osborne Mint is part of the Osborne Coinage family, which includes Osborne Coin, TokensDirect and Van Brook of Lexington. The mint, a 60,000 square foot facility in Cincinnati, Ohio, houses the development, engraving and manufacturing of numismatic quality collectible rounds and coins. Products made by Osborne are manufactured to strict standards for metal purity, weight and dimensions. Osborne Mint strikes thousands of collectible rounds annually and circulates them to the public through certified distributors. Now one can purchase collectibles direct from Osborne Mint through their e-commerce portal (Shop-The-Mint.com). Featured collections include: designs by Lisa Parker, Anne Stokes’ Dragons, The Galaxies and Nebulae, The Fight for Freedom’s Sake and The American Legacy Collection. Gold plate, fine silver and copper collections from Osborne Mint are truly pieces of art and are 100% “Made in America.”

For more information on Osborne Mint visit our website at www.OsborneMint.com.

Otto the Otter Round Here at Osborne Mint, we know animals, we have minted a lot of them on silver and bronze. We have m...

The Copper Metal Market is Going Bonkers! At Osborne Mint we watch the metals market like a hawk. We are constantly se...