"From the Mint" Book IX

Let’s talk about the budding industry of cannabis (aka marijuana) that is getting ready to flower from coast to coast.  The criminal aspect of the business is going up in smoke as cannabis becomes more and more a legitimate commodity.   Our newest copper designs pay homage to this growing industry with a series of 5 collectible rounds.

Thirty-three states and the District of Columbia have now legalized some form of cannabis usage either for recreational, medicinal or both.  Eleven states including Alaska, California, Colorado, Illinois, Maine, Michigan, Nevada, Oregon, Washington DC, Washington and Vermont now have legal cannabis usage of some degree.

Additional states are contemplating the legalization of marijuana due to the great benefits to the state’s coffers.  Much in the manner that legalizing lotteries provided revenue, many states are now eyeing the taxability of marijuana as their new cash cow.  Illinois was the most recent state to take a toke and legalize recreational cannabis usage.  It is the sixth most populous state in the nation with over 12.7 million persons and is home to Chicago, our country’s third largest city by population.  With numbers of this magnitude legalization of recreational pot market paid immediate dividends, with over $3.2 million in sales on January 1st alone.  Nationwide estimates show that annual weed sales could skyrocket from $10.9 billion in 2018 and $12 billion in 2019 to between $50 billion and $200 billion by 2030.  These statistics will make the cannabis market the fastest growing industry for the next decade.

With these numbers it’s easy to see why we chose to feature the cannabis industry for our newest collection.  Each of the five collectible rounds highlights a different focus on cannabis.

Recreational Use: The first coin in the Cannabis Collection depicts the 10 states and the District of Columbia that have currently legalized marijuana.  These states are considered "ahead of the curve" when it comes to the 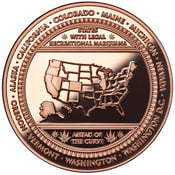 cannabis industry.  The map of the United States on the backside of the coin makes it easy to see the geographic locations of these more progressive states with respect to cannabis.

The next two coins in the collection pay homage to marijuana and to the marijuana leaf, long considered the most recognizable symbol for marijuana.  In fact, the leaf has entered the realm of iconography. That green leaf with serrated edges and seven leaflets fanned out like a hand with its fingers open reaching toward the sky is a global icon.

According to Larry Gabriel’s article “The symbolic power of the marijuana leaf” in the Detroit MetroTimes from July 2, 2019, “The cannabis leaf implies so much more than the simplicity of its visual presentation. It represents getting high. It represents rebellion against authority. It establishes cannabis friendliness. The simple leaf implies nature and safety and somehow seems like it could be part of the environmental green future. The ecology movement also uses leaves in its imagery. Leaves are cool.”

Now you know some of our inspiration for creating these leafy coins:

Big Leaf: In the design of the first marijuana leaf coin our designers and engravers took some liberties with the art.  The final art delivers an abstract impression of the marijuana leaf embedded in a host of various shapes and textures.  The reflective center of each fan of the leaf engages one to stare not at the coin, but into the coin.  Dude!  That’s deep!

Hidden Leaf: The question posed with this coin is “Can you see my stash?”  You have to look close at this coin to find the hidden cannabis leaf in the background and covered by a bunch of smaller leaves.  Give this coin a run over the top with your fingers and feel how unique to the touch this one is.

The 60’s were the heyday for artists like Janis Joplin, Jerry Garcia and Jimi Hendrix.  These stars personified the burgeoning hippie culture of the day.  Tie dyed shirts, flowers in your hair and music festivals being at Woodstock headlined the 1960’s, known as the dawn of the golden age.  We knew that Osborne Mint had to include a coin paying tribute to these years, which provided a foundation for today’s cannabis movement.

Psychedelic Cannabis:  Get ready for your trip as this coin takes you back to the glory days of marijuana.  The retro style of this groovy round includes wavy lines, bubble font and a winding vortex that takes you through the coin.  This piece is far out, badass and gnarly; perfect for your slug bug or your pad – PEACE! 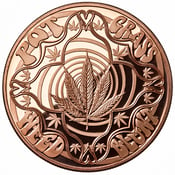 Herb, grass and ganja are just a few of the terms used to reference marijuana.  Over pot’s long history, initial uses of the plant were medicinal, early American colonists grew hemp for textiles and rope and we know of its use during the 60’s.  As you read more and more about marijuana, the variety of terminology is shotgun at you.

Cannabis Slang: This is our preservation of culture as we worked to document the numerous slang terms for marijuana.  The leaf in the center of the coin is encircled by words and phrases that reference weed. The detailed engraving of the words on this piece demonstrates Osborne Mint’s skill set and overall commitment to quality.  Message me if you know any terms we missed. 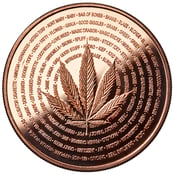 All of the Cannabis Copper Coins share a common reverse featuring the caduceus in representation of the medical use of marijuana.  The medical symbol is accompanied by the chemical makeup for THC (tetrahydrocannabinol) the chemical responsible for most of marijuana's psychological effects. 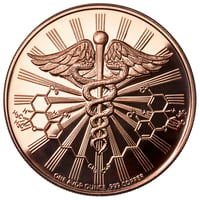 These collectible rounds were crafted to attract an audience that seeks and appreciates artisanal cannabis creations.  According to a Gallup Research Study (July 2019) commissioned by the National Cannabis Industry Association (NCIA), 66% of Americans want to see marijuana legalized, the highest number to date.  Combining that statistic with the history of herb, the industry potential and the cherried medical future, it is only right to salute cannabis with our 5-piece collection of Cannabis Copper Designs.

Don’t bogart this article, hit it and pass it on!

For more insight on our inspiration, check out these website portals dedicated to all that is Cannabis.

"The symbolic power of the marijuana leaf” Detroit MetroTimes by Larry Gabriel | https://www.metrotimes.com/detroit/the-symbolic-power-of-the-marijuana-leaf/Content?oid=22038410

Some terms used in the blog  - in case you're not up to date on the slang.